The Greatest Man I Never Knew...

He was the greatest man I never knew. Every time I hear that song, I think of him.

"The greatest man I never knew lived just down the hall,
and ev'ry day we said hello but never touched at all.He was in his paper. I was in my room.How was I to know he thought I hung the moon?"

For me, he was the only dad I ever knew.

To me, Lewis Berg was not my stepfather. He was not just some guy my mom married. He was my dad. I always feel odd trying to explain that though when many knew my father passed away when I was ten. Now they ask, you had two dads? Yes. I was blessed with two fathers.

My biological father, Art passed away as a janitor from a scaffolding accident putting up a high school scoreboard in 1980. I was at the age of ten. I did not grieve until I was the age of 13. It never felt real until one Thanksgiving in 1983.

Lewis Beg passed away on the 4th of July, 2020 of natural causes because of lung cancer, black lung, and breathing issues.

He was the only father I ever knew.

He and mom married when I was thirteen, the year of 1983. I pouted all the way through the ceremony. In our pictures, I am pouting. I didn't want a new dad. I wanted my dad.

Many years later, was when I acknowledged him as my dad, but he always WAS my dad.

He bought me my first ten-speed bike.

The bike was the start of our relationship. When my mother and he were dating he brought me a bright red big kid bike. A ten-speed. I barely could ride with the seat all the way down but I didn't care. I rode it everywhere and had it until I was 18 years old.

He was my chauffeur.

He took me to dance, ballet, or modern, or jazz or ice skating, or gymnastics. He took me to modeling classes, baton classes, etiquette classes, choir, bells, whatever I was in, he was my ride.

He was my referee.

He always stepped in when mom would be really upset with me about something. HE knew mom's temper could fly off the handle and I was always so sensitive that he wanted to protect me.

He was my friend.

We went to Golfland almost every weekend. We had a pinball machine in our house for many years and we would battle to see who had to do the dishes! He told silly dad jokes and many Norwegian Ole and Lena jokes. We would do funny little skits back and forth and mom would hake her head and roll her eyes.


"You think that's sufficient?"
"You say you went fishing?"

then together we made up one to add...

Mom would roll her eyes and dad and I would laugh and laugh. my husband and I do the skit to this day. It will be a fun way I will always remember him.

He taught me to crack my knuckles, take things apart and not know how to put them back together (my mother hated that) and he taught me how to enjoy family time by playing Yahtzee or Dominoes or cards. In the past few years, I knew he was not well when he refused to play Yahtzee with me anymore.

He tried to teach me to drive a stick and after an hour dropping the clutch and getting stuck in traffic, as we were trying to get gas down the street from where we lived, I could not get the car up the driveway to the gas station and got so mad I put it int park and told him I would meet him at home. He teased me for years about that and never let me forget it. It was a funny story, we always shared.


As an adult, my life took many turns and he was always there for me. Sometimes being the dad chastising me for my bad choices and in his Norwegian way, telling me "get my shit together" and in other ways bailing me out or being there as I cried about things I was going through to him and mom.

We have had our ups and downs as all families do and yet we always end up speaking to each other again and moving on in our lives. No matter what, he was there for me.

When I found out I had cancer the first time, right away he told me to come to see them. I went down right after my port was installed before I started chemo. You could tell it was hard on him to see me suffering.

When my second cancer came, 18 months after being in remission, once again, he wanted to see me. He did all he could to be there for me and help me. He always was there for me, even if he never said. Many times I would find out through my mom because that's just the way he was. He may not have always been the one to tell me, but I knew.

Just like I knew that he loved me, though he didn't ay it often. He would hug me, or make jokes with me, we would make sure my tires were full of air or check the oil, things dads do.

I knew, however, that he thought I hung the moon.

I was his "Gold Turd" as the family would often joke.

My mother and I have spoken daily in these last days leading up to his passing and now every night since his passing. She told me last night how he would tell everyone that would come in about something I gave him or something I did. No one could leave the house without knowing or hearing about me someway somehow.

While we as daughters know our fathers love us, hearing this touched my heart deeply.

He was my dad.

and now he is gone.

My heart is sad but my memories of our relationship will live on forever... 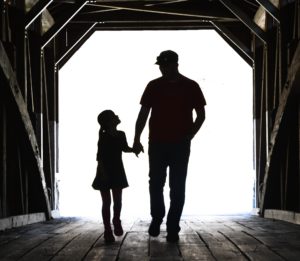