Closure...Yeah Gotta Get Me one of Those

Closure is not an easy thing to come by most. Letting go of someone you love has got to be one of the hardest things to do. But when it's not working, it's not working. I love J more than anything in the world. Somuch so that when I found out that J was dating already, he didn't expect it to happen so soon, well, losing it is an understatement. He barely emailed me anything then through a series of texts said some nior things that just left me wondering even more. I felt like I wasn't getting any answers and kept begging him to answer me. If her truly wanted closure there are things I needed to know;.

I became "Psycho Girl" (sounds like a great comic).

I wouldn't' stop texting, I did things I normally wouldn't do, I heaved chucks of sobs to where I was throwing up.

“It takes a couple seconds to say Hello, but forever to say Goodbye.” ~ Anonymous.
“Relationships are like glass. Sometimes it’s better to leave them broken than try to hurt yourself putting them back together.” ~ Unknown.

Getting over a break up is hard no matter what – but it’s even more difficult when you don’t have relationship closure.

What is Relationship Closure?

Relationship closure is when you – whether you’re a married partner, boyfriend or girlfriend, disgruntled colleague, or unhappy family member – don’t discuss why your love relationship ended.


Denying an ex closure when you’re breaking up is worse than unhealthy: it’s damaging and destructive. Healing comes faster and easier when you’ve had a chance to say goodbye.


I wasn't getting that and so it was tearing me apart. I finally was able to get some answers tonight and maybe that will be the healing I need.

MICH: Oy. Look, I've been through a divorce, trust me you're gonna be fine. You just can't see it now because you haven't had any closure.

RACH: Yeah! Closure. That's what it is, that's what I need. God, you're brilliant! Why didn't I think of that? How do I get that?

MICH: Well, you know, there's no one way really, it's just, you know, whatever it takes so that you can finally say to him, "I'm over you."

RACH: Closure, that's what it is. Closure. 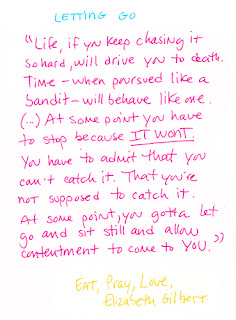 When you’ve lost someone you love, it’s easy to focus on the great parts of your relationship and life together. But, there was a reason you broke up — maybe even several reasons! Don’t ignore the “bad” parts of the relationship and idealize the best parts…instead, keep reminding yourself that you’re letting go of the past because holding on to it isn’t good for you.

Part of letting go of someone you love is accepthing that you may never have all the answers.

Letting go of the past isn’t something you do once – and poof! You’re free, healed, and happy! Rather, letting go is a journey peppered with steps forward and steps backward, good days and bad days. I grew up constantly saying hello and good-bye to new families, friends, and cities. I learned how to love, let go, and open my heart to love again. And I’ve survived those heart-wrenching, gut-twisting breakups that slam you to the ground and rip you to pieces. Letting go is a process that takes time.I know it will take time.

Through a series of chat messages tonigt I finally received some answers. 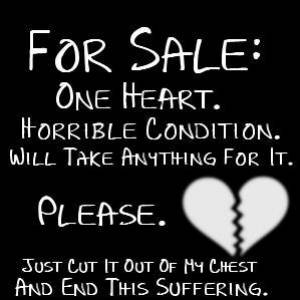 J said he loves her. He said he has always loved her. It explains so much to me as to why he could never commit to me. Maybe his subconscious knew I don't know. I want to want his happiness. But I am hurting so very deeply inside. I feel like I wanna die.

J finally answered those questions I didn't want to hear. She is from his past. He think he always loved her. He might one day want to marry her. He feels that strongly. WOW. In many of these moments I was shaking uncontrollably, my chest hurt so bad I thought I needed to go to the hospital, I was heaving sobs and it was ripping me and tearing me to shreds.

I told my counselor last night I didn't want to be here anymore. I wanted to be some where else. Somewhere "safe" she said she didn't feel I was that bad off and talked me off the "metaphorical ledge".
Even tonight after hearing those things from J I still felt this way alot. I have been taking some Xanax to calm down. I try really super hard NOT to throw a pill at my problems. Most times I am against it. But last night and today and tonight, I just don't want to feel. Anything. But I know my heart will go on. It just dones't feel like it right now.

I do care about J more than he even realizes. He didn't think this would bother me like this. He felt I had already left in my heart. Any attempts I had to tal to him otherwise was lobbed back into "It's your own fault" syndrome. I had that coming.

Since the day I left I have been begging and saying "Oh god what did I do?" Now more than ever I feel that way. Part of me feels there truly is no hope ever for us. He will marry her. He will get the babies he wants so desperately. He has found her.

As I have said before. I was the Rebound. It solidifies it to me now. Though I thought I overstayed my welcome, I guess I stayed long enough to make the way for her. Timing is Everything...

The person who loves him wants them to fail.

The person who cares...wishes the best for them. My Wish for you...